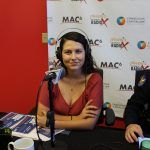 Brenda Puga is the Development and CR Manager for Special Olympics Arizona.

The mission of Special Olympics is to provide year-round sports training and athletic competition in a variety of Olympic-type sports for children and adults with intellectual disabilities, giving them continuing opportunities to develop physical fitness, demonstrate courage, experience joy and

participate in a sharing of gifts, skills and friendship with their families, other Special Olympics athletes and the community.

Special Olympics Arizona’s (SOAZ) goal is to empower the over 180,000 Arizonans with intellectual disabilities to be healthy, productive, and respected members of society through SOAZ’s year-round sports training, competitions and support programs.

The Phoenix Police Department is the largest police department in the State of Arizona, which is responsible for providing law enforcement services to the fifth largest city in the United States.

The City of Phoenix is one of the largest cities in the country geographically, spanning more than 519 square miles and having a population of 1.6 million people. The Department is comprised of nearly 4,000 employees. The Phoenix Police Department has a long and proud partnership with Special Olympics Arizona and the Law Enforcement Torch Run (LETR). LETR is national movement and the largest representation in raising awareness and money for Special Olympic Athletes. 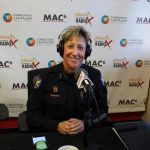 Mary is a proud mother of a Phoenix Police Patrol Officer who serves the Maryvale Precinct. Mary has been involved with Special Olympics Arizona (SOAZ) for more than 25 years and serves as an executive board member for the Special Olympics Law Enforcement Torch Run.

Mary’s favorite times are when she can directly interact with the athletes. “Police officers choose their career to help people and make a positive difference, but our job exposes us to negativity and unimaginable challenges.”

It is the commonality in facing daily challenges that bonds the relationship between Special Olympics Arizona athletes and police officers. We are very proud to support our athletes and very thankful for the support and joy our athletes give us.